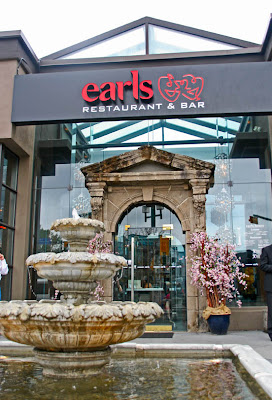 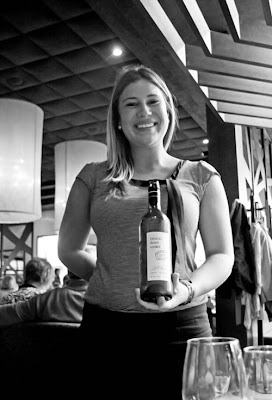 A beaming Lauren Barr, Assistant Restaurant Leader, was on hand all night to share her knowledge of wine, cocktails and beer, to give more insight into the restaurant and to answer our questions. A true delight 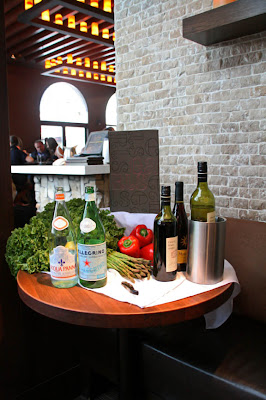 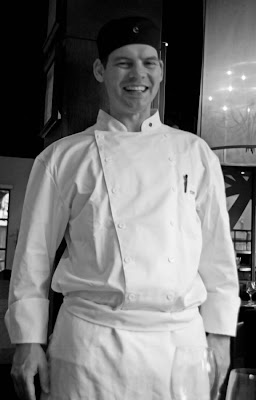 Chef Jason Gillies, who has been with Earls for 14 years, was a font of information and anecdotes about the food. Sharing stories such as how he came to be a chef after a stint bartending, his efforts to make a special cake (can't give away the surprise) and the inspiration for the dishes, he was warm, engaging and passionate. This is one chef with versatility - he can make both savoury and sweet dishes. Oh and he also has killer soccer skills too. 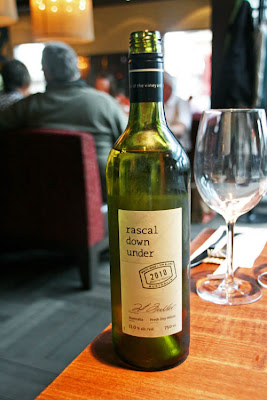 Rascal Down Under is made exclusively for Earls. After an extensive search, they chose an Australian winemaker and photos from their sourcing trip are shown on the bottle. The Rascal Down Under White (Reisling) and Red (Shiraz-Cabernet) were offered as an aperitif. 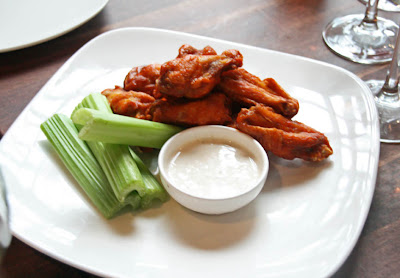 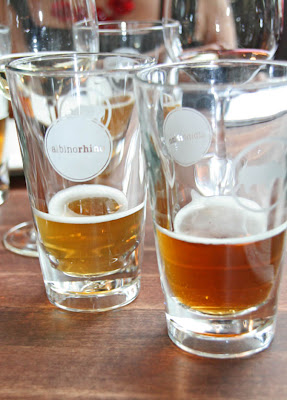 The wings were paired with Albino Rhino pale ale, the lighter of the two is Alley Kat Aprikat from the Edmonton based microbrewery (paired with the dish below) Like many Earls dishes this is a classic reinvented. The Prawn Dynamite Roll has been updated with the addition of mango, avacado, sriracha mayonnaise and a maple soy reduction. Almost every table we spotted had ordered a plate of these. 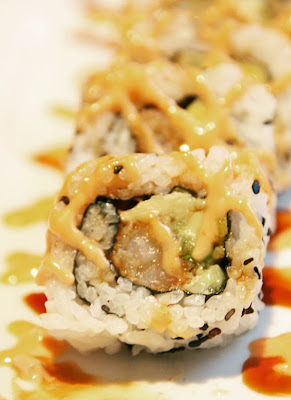 A closer look at the rolls. We also appreciated the compostable chopsticks. 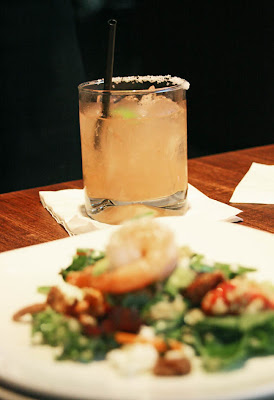 A major addition to Earls is Cameron Bogue, Director of Mixology. A veteran in the hospitality industry, Bogue has revamped the drinks menu at the restaurant and insisted on fresh ingredients. Here the Grapefruit Margarita made with El Jimador Blanco Tequila and housemade grapefruit syrup. The 100% agave tequila made a huge difference to the taste. One of the most balanced margaritas we've had. 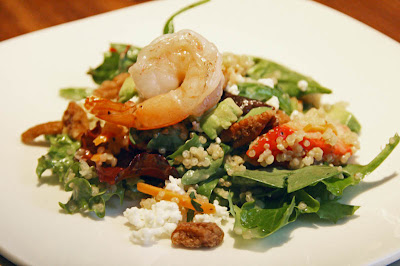 West Coast Prawn Salad with quinoa, and the surprising touch of strawberries. Chef Gillies said that the Earls team had taken a trip to the West Coast and saw quinoa on all the menus. The salad is an expression of that trip. 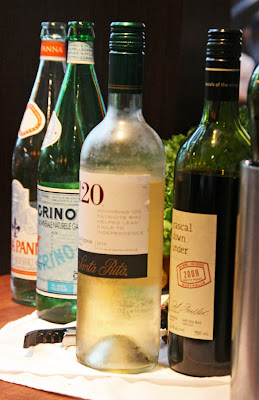 Another pairing with the salad was the Santa Rita 120 Sauvignon Blanc. 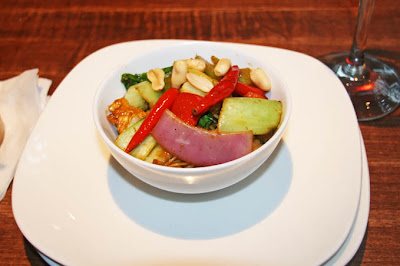 The Hunan Kung Pao was inspired by a trip the Earls team took to San Francisco. With smells wafting onto the street from a hole-in-the-wall restaurant, the team decided to check it out. The man inside was chef, server, and host and he created a wonderful dish for the team. This dish is inspired by that experience. A perfect balance of hot, sweet and earthy all abound in this dish. The noodles are perfectly cooked, and the crunch of the vegetables adds a nice texture to the dish. "When I start eating this dish, I physically cannot stop", notes Gillies. 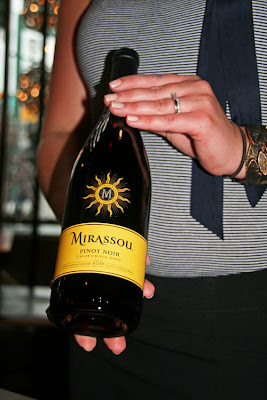 Lauren said that this was one of her favourite wines on the menu. From the oldest vineyard in America comes Mirassou Pinot Noir. 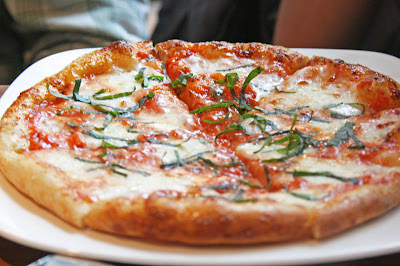 What's more fun, familiar and great than pizza? The Naples Margherita from Earls is a nice middle ground between true Italian pizza and North American pizza. Made with San Marzano tomatoes, fresh mozzarella and Grana Padano The texture of the dough is in between Italian and North American, and as a finale to the meal, is delightfully addictive. 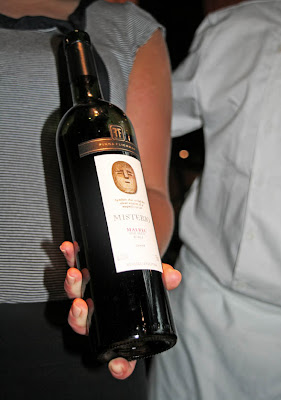 Finca Flichman Malbec Misterio from Mendoza, Argentina offered as a pairing for the pizza 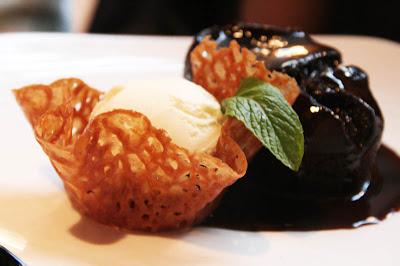 Chocolate Sticky Toffee Pudding - we've had a lot of sticky pudding lately (seems to be a fad) most of well, stodgy. This was a treat as it tasted more like a moist chocolate cake, light and fluffy.

Want an amazing dining experience ? Want to know the inside scoop on your meal? Want to hear secrets from the chef? Earls Kitchen and Bar makes it all possible with Chef's Table available throughout Calgary for groups. A great experience for a group of friends, as a charity auction item, or as a team building exercise, it showcases several items from the menu paired with wine, beer and cocktails.

From the minute we arrive the team at Earls Tin Palace are ready to greet us with smiles. Lauren Barr, Assistant Restaurant Leader and Chef Jason Gillies both introduce themselves and were eager to tell us about Earls. After some history of the company (did you know the first Earls opened in Edmonton), we have an aperitif of Rascal Down Under wine, made exclusively for Earls. "Chef's Table is a great way to learn about how we do things differently, its a nice night and a great time," says Barr. Adds chef Gillies, "It's a great way to give regulars more of a chance to see their food and newbies to discover us. It's also a way to touch the local community as people use them for charities or fundraising. We try to keep it along the line's of a fine dining chef's tasting."

From classics such as Hunan Kung Pao, to revisited dishes such as the prawn dynamite roll, to a dessert of chocolate sticky toffee pudding, the menu was enhanced with personal stories from chef Gillies about how, where and why the dish was made. Chef Gilles is a rarity among chefs - equally at ease with savoury and sweet. He was proud of the fact that Earls role in mentoring and fostering new talent. "I grew up at Earls. We have been on a journey of culinary knowledge and our menu reflects that. "

A standout for the night was the grapefruit margarita, brainchild of Mixologist Cameron Bogue, who was recently named Director of Mixology for Earls Kitchen + Bar. His philosophy about fresh juices made to order and homemade simple syrups have refreshed the cocktail offerings at the restaurant."I've never seen somebody speak so passionately about drinks. He's a breath of fresh air," says Gillies of Bogue. Using 100% agave tequila and made-to order juice the margartia was well balanced. Another great feature of the menu was the wine list with a selection of one price reds and whites listed from light to rich.

We love Chef's Tables - they are an interactive and incredibly personal dining experience. Earls' take on the concept is relaxing, jovial and just plain fun!

Catch more from the Chef's Table at Earls Kitchen and Bar in the Summer 2011 issue of City Style and Living Magazine.

Twitter: @CityStyleMag
Posted by City Style and Living at 10:54 AM

Wow, this party food is just mouthwatering. The party seems to be very enjoyable. At party event venue Chicago you can have wonderful experience of luxurious parties. I just celebrated my birthday over there and really had great time.