NOT THE GREAT BRITAIN YOU EXPECT: 27 PHOTOS FROM DEVON AND CORNWALL THAT WILL CHANGE YOUR MIND 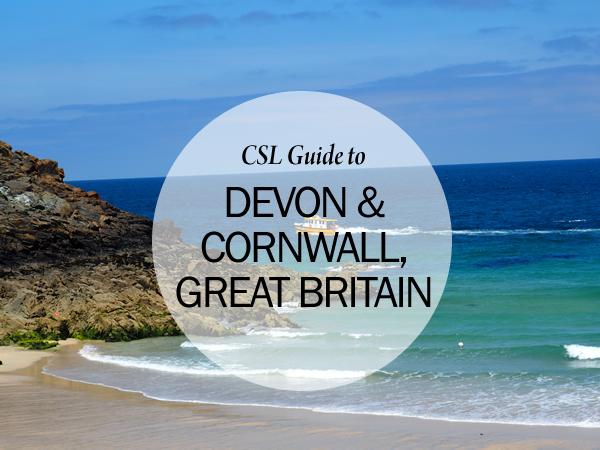 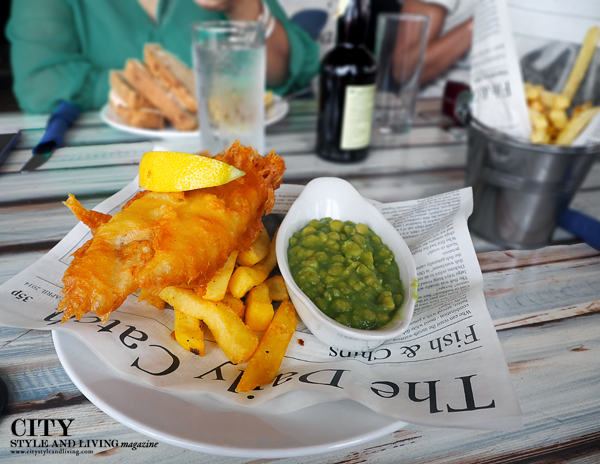 My first fish and chips at the The Old Boathouse Café in Plymouth, Devon did not disappoint - crisp, hot and delicious. An award-winning seafood café and restaurant, set in a unique location in the fisherman’s arches on the Mayflower Steps, its specialty are fresh fish and shellfish, sustainably caught by the restaurant’s boat -The Southern Star. 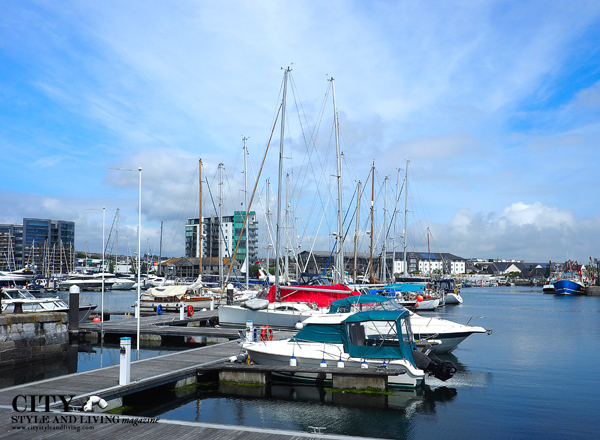 A stunning view of Plymouth’s Marina at Sutton Harbour, the water and sky blend magnificently into an unbelievable aqua blue with some of the best cruising waters in the UK. Situated in the old quarter of Plymouth, there are places to eat and drink, shop and be entertained (like The Barbican, The Hoe, and The Lighthouse ‘Smeaton’s Tower’). 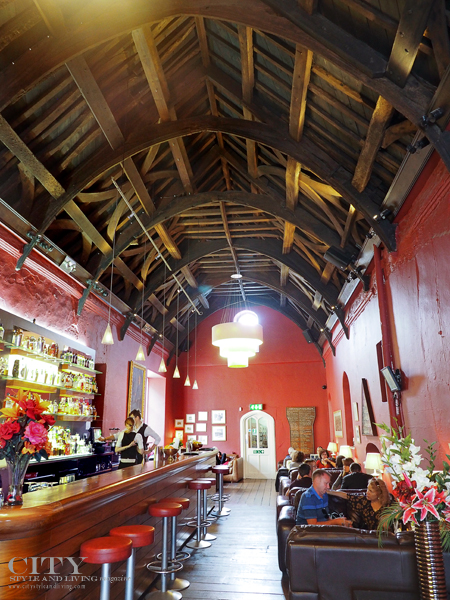 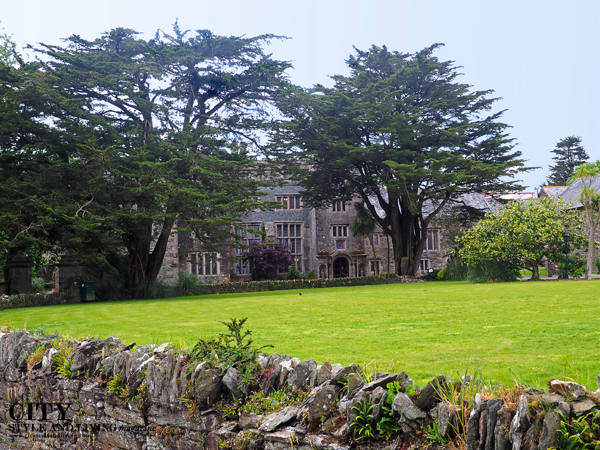 Boringdon Hall Hotel, the majestic 16th century manor house in Devon displays the drama of Elizabethan architecture, imposing stone towers, secret archways and curious hallways which seem endless. Boringdon Hall Hotel is situated on the edge of the Dartmoor National Park and ten minutes from Plymouth (a great town and country experience). The grounds at Boringdon Hall are immaculately kept with flora and fauna. If you're planning a wedding this may just be the ideal setting. 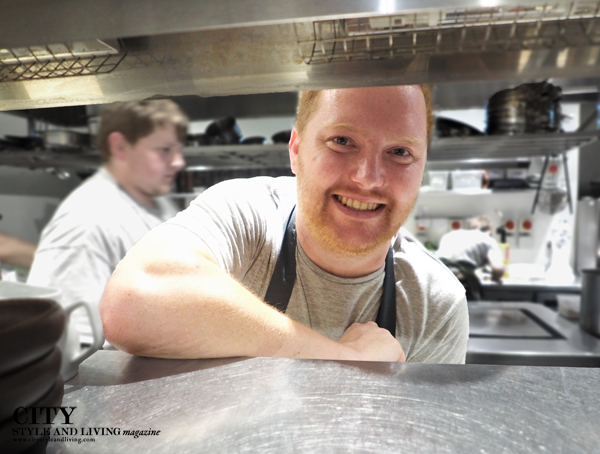 I had a delightful dinner at The Treby Arms a rustic Michelin-starred country pub. I was even more surprised that Head Chef Anton Piotrowski, who was the winner of UK’s Masterchef in 2012 prepared my meal himself and was happy to have his picture taken even with a full and bustling restaurant. 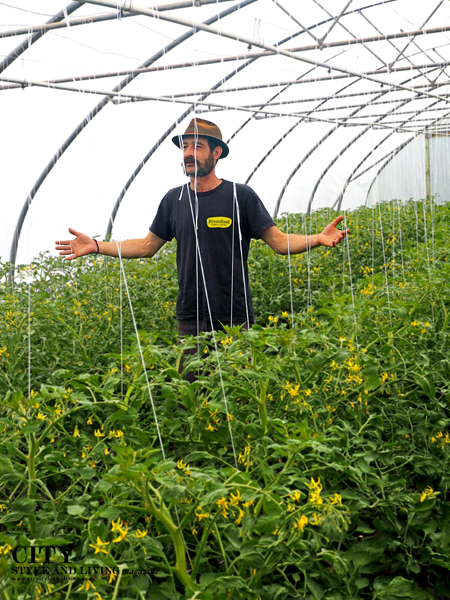 Ed at Riverford Organics one of Britain’s most famous and successful organic farms – and provider of one of the largest vegetable box delivery schemes in Britain – takes me on a tour of the farm (pictured here amidst a crop of tomatoes in a greenhouse). My luncheon at Riverford Organics was one of the best meals in Devon, the dessert table of ‘puds' was to die for - brownies with chuncks of nuts, Eton mess with fresh cream and rhubarb compote, lemon posset, custard tart, sticky toffee pudding, biscotti with custard, blueberry clafouti and the list continues....Ah, a dream day for those with a sweet tooth! 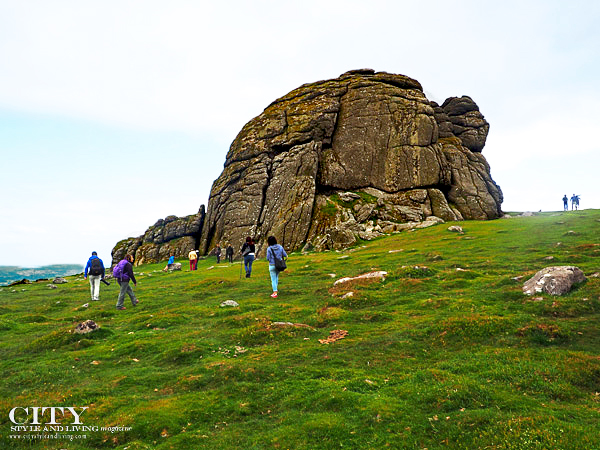 My adventure of Letterboxing on Dartmoor National Park was a mixture of treasure hunting and puzzle solving. Do get a guide if venturing out on the moors, as Dartmoor National Park covers an area of 368 square miles, containing the highest land in southern England (High Willhays at 2037ft), it is both a scene of tranquility and the place to get active, but it is all too easy to get off course. As seen above, the landscape has stunning views, awe-inspiring granite tors, deep wooded valleys with fast flowing rivers, and rugged, wide open spaces. A sight to behold. 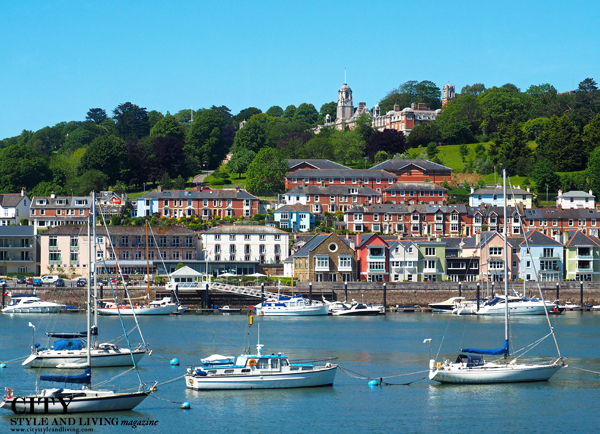 I travel from Paignton aboard the Dartmouth Steam Railway where I experience an exhilarating trip through the countryside of South Devon and along the coastline of the English Riviera, a journey that Agatha Christie herself may have taken from London. The Dartmouth Steam Railway arrives in Kingswear, opposite Dartmouth, and here I take the short boat trip boarding the Greenway Ferry, departing from Town Quay across the river to Dartmouth. 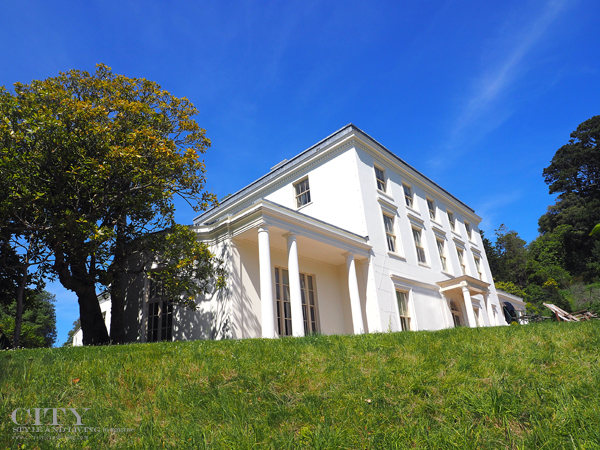 2015 marks the 125th anniversary of the birth of one of the world’s most famous crime writers – Agatha Christie whose private holiday home is called Greenway. Greenway contains many of the Agatha Christie’s collections including archaeology, silver, botanical china and books, I am amazed at the collection of religious books and idols originating from India. The landscape is absolutely spectacular and the boathouse allows a wonderful view of the river. 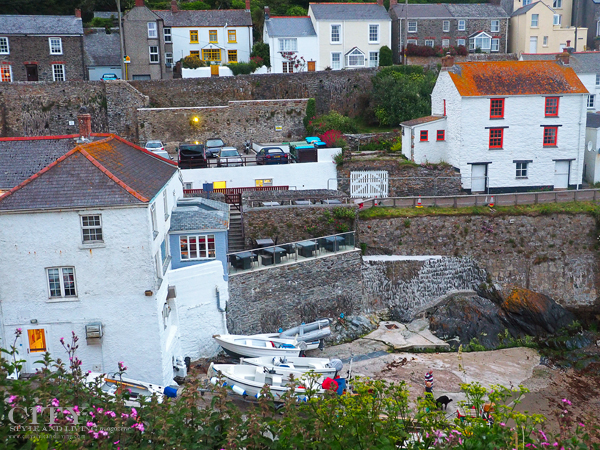 I depart Devon for Portloe, Cornwall and spent the night at The Lugger Hotel a quaint hotel sitting right on the water’s edge of the beautiful coastal village of Portloe, one of many old fishing villages that dot the Cornish coastline. This charming17th century inn is surrounded by cliffs and headlands that form part of the Cornish Coastal Footpath. Pictured above, looking down upon the hotel from a promontory. 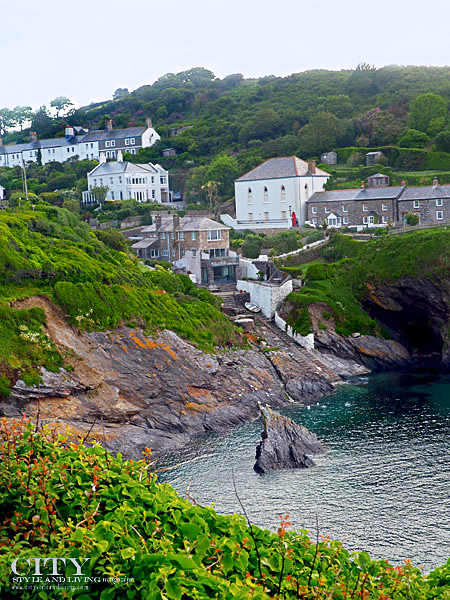 I eagerly hike to the top of the cliff beside The Lugger Hotel and am transported to another world - slate rock, teal waters, greenery, and stone buildings. 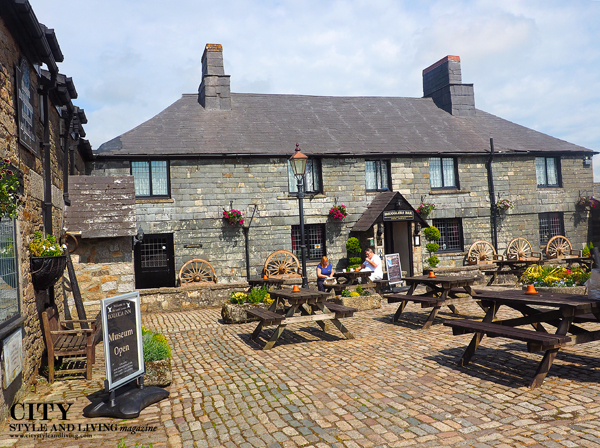 From Portloe, I travel across to Bodmin Moor to see the famous Jamaica Inn, Cornwall’s most famous smuggler’s inn and the setting for Daphne du Maurier’s novel. I meet the owner who escorts me to a haunted room where a ghost visits occasionally. 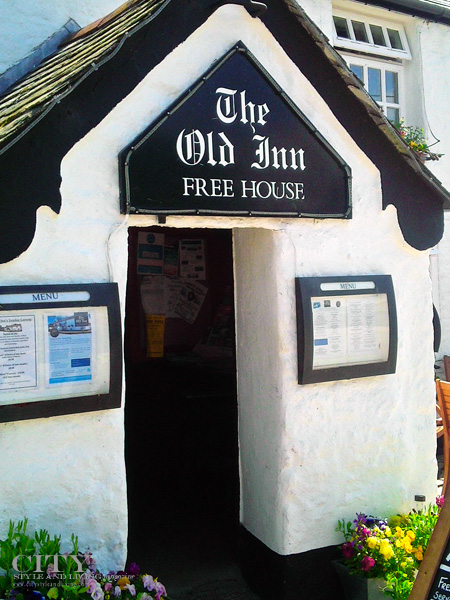 I stop for luncheon at The Old Inn. 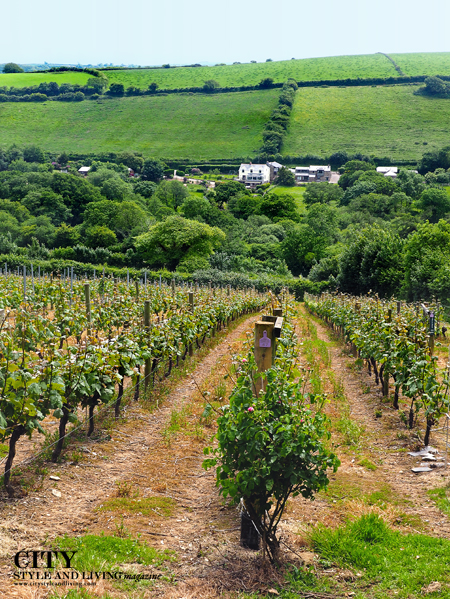 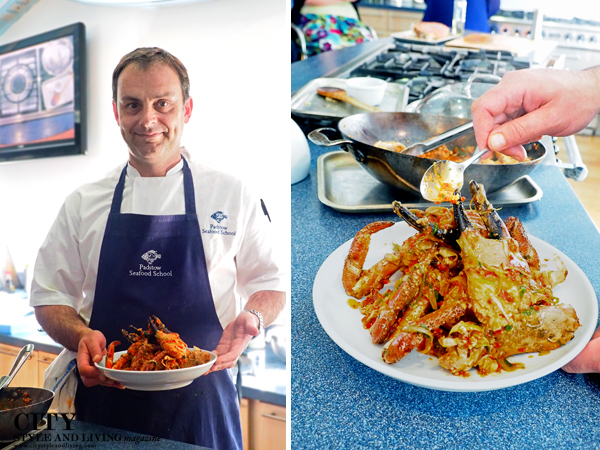 I take part in a one-on-one cookery workshop at Padstow Cookery School with head chef lecturer Mark Puckey. I made chile crab with some of the region's famous seafood. I then had dinner at Rick Stein’s famous Seafood Restaurant. 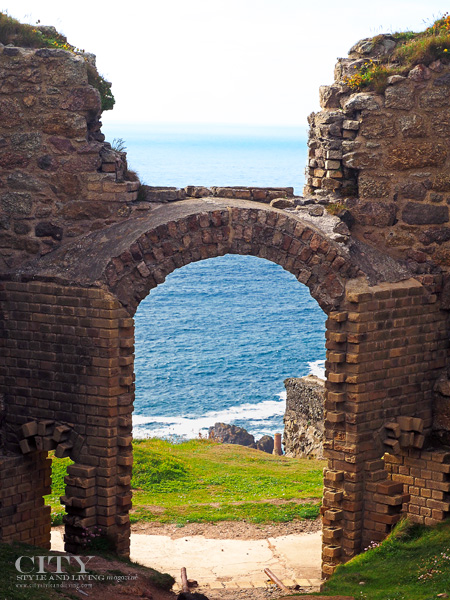 Breathtaking view from an old tin mine in Cornwall a relic from a time when this was a major industry in the area. 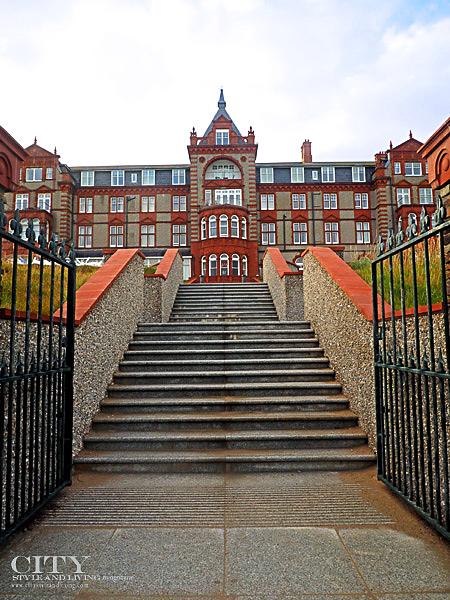 The Headland Hotel & Spa is a mesmerizing, terracotta structure and Cornwall's only 'Five Bubble' rated spa hotel, perched on the breathtaking Cornish coastline, overlooking Fistral Beach and Towan Head. The Headland Hotel is housed in an historic building located in the coastal town of Newquay. 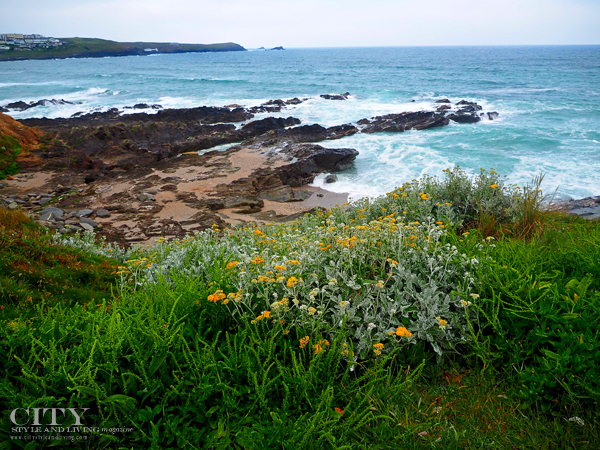 One of the many spectacular views on a hike from The Headland Hotel &Spa.There are umpteen trails surrounding the property with guaranteed views. 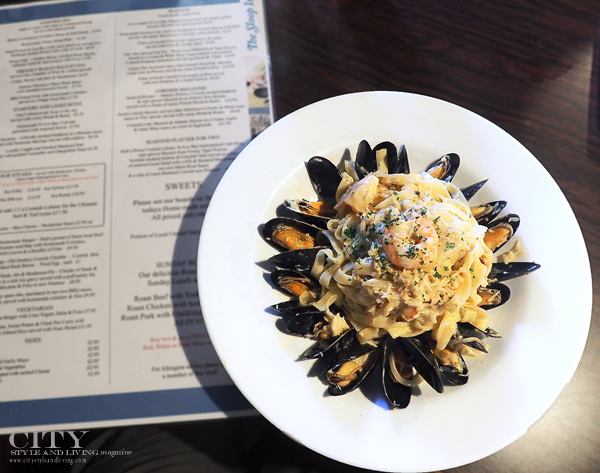 I had a delicious luncheon at The Sloop Inn, it was a difficult choice between fish pie and this tagliatelle with seafood – you can see which one I chose at one of Cornwall’s most historic inns. The delicious meal was equal to the stunning views overlooking St Ives harbour. 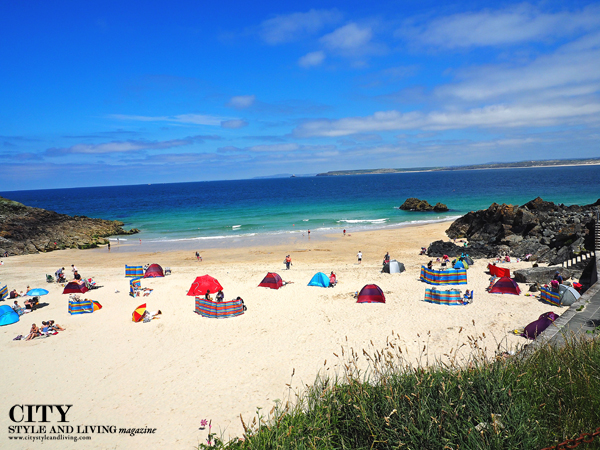 One of the most picturesque hikes on my way to Tate St Ives museum. The view is awe inspiring - this is not the Great Britain many of us imagine with its white sand beaches, gigantic black rocks and azure waters it could easily be mistaken for Hawaii. 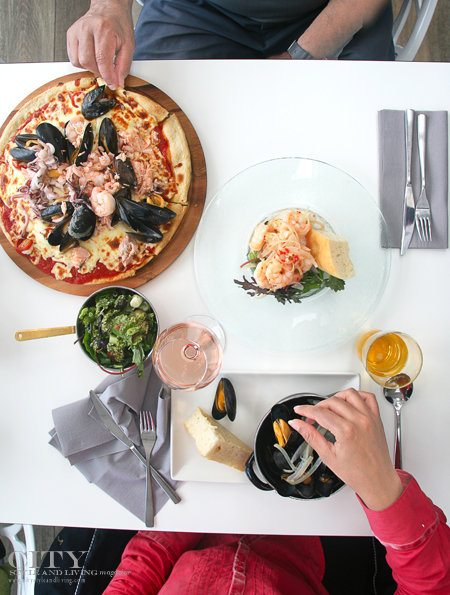 A lunch at Carbis Bay Hotel. A short 25 minute hike from St. Ives with spectacular views and forested respite, Carbis Bay is the Miami of Cornwall. My lunch featured the ever-present seafood and wonderful Cornish cider. 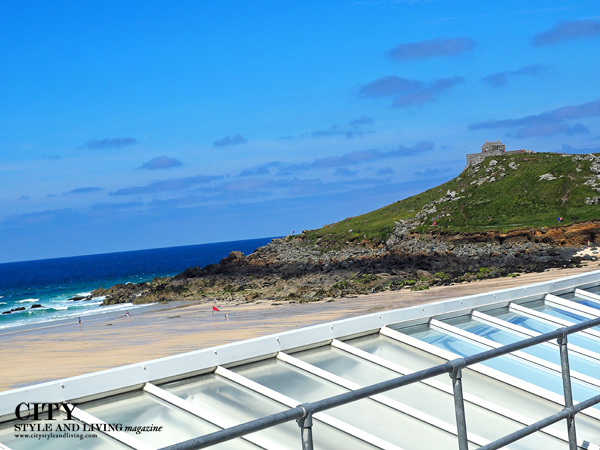 The view from the Tate St Ives museum, the architecture of the building is in itself artwork. 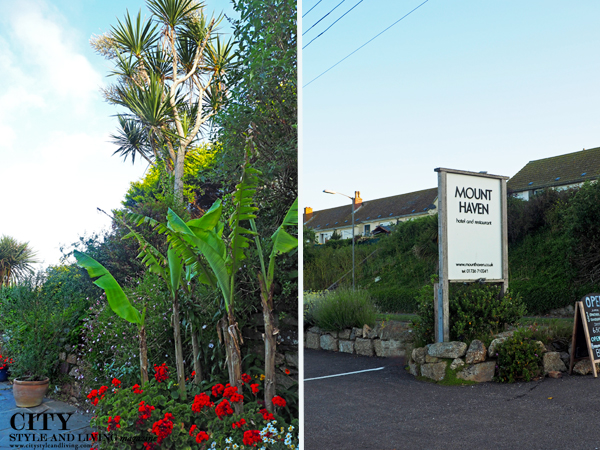 I overnight at Mount Haven Hotel, in Marazion, I feel refreshed and rejuvenated by the ambiance of this hotel, the welcoming Lord Ganesh statue energizes my spirit. I wake up in the morning with a spectacular view of St Michael’s Mount. Pictured above, the grounds of the hotel which features palms, bananas and many other sub-tropical plants. 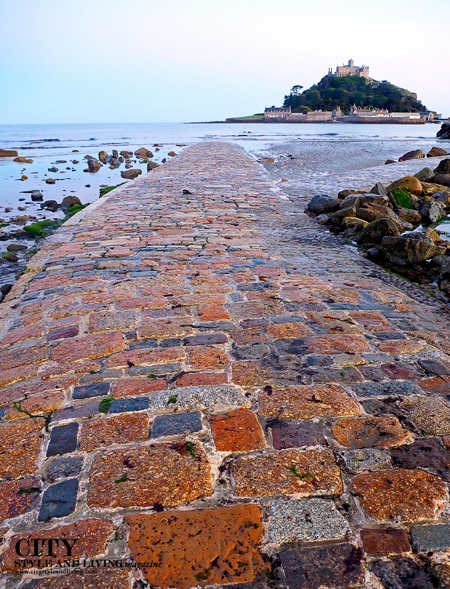 A view of St Michael’s Mount while having dinner at the Godolphin Arms. 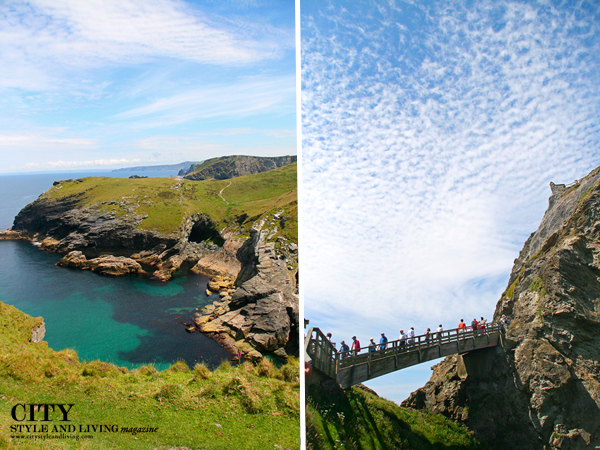 Tintagel Castle, the famed "King Arthur" castle. The colour of the water here looking down upon Merlin's cave is surreal as is the cloud formation that hangs above the pedestrian bridge that links visitors to the ruined castle. 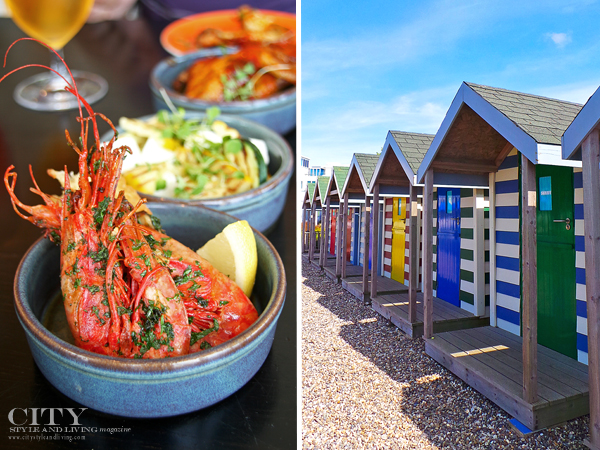 Lunch at St. Moritz Hotel close to Daymer Bay near Trebetherick village. I passed surfers on the way to the hotel which features vibrantly coloured beach houses.

For a break-the-mould visit to the UK, Devon and Cornwall deliver in spades. Imagine driving through tiny hedges on unnamed roads sometimes reversing for other cars to pass, hiking to flower strewn clifftops and marveling at the great Atlantic. This is home to the southernmost point in the UK and wild adventures await.
Look out for much more Devon and Cornwall in an upcoming issue of City Style and Living Magazine.

You may visit the New Summer 2015 issue of City Style and Living magazine (also available in print) at the following address (follow the three simple steps to access the full magazine, online) :

This is an immaculate location for a party, wedding, or other special event. Incredible views and classy interior. I have been to a few parties here and they have been really well done. The hall was perfect for mingling. The courtyard at DC wedding venues was beautifully decorated as well.

These landmarks are so awesome, even when I lived there, I always went to these places again and again even though they are supposedly “touristy”