Email ThisBlogThis!Share to TwitterShare to FacebookShare to Pinterest
Thieves come in any industry in all forms, (even the magazine industry). Top Chef All Stars illustrates this point. Lesson: Do not steal. The victor will always prevail. ALWAYS!!!!!! 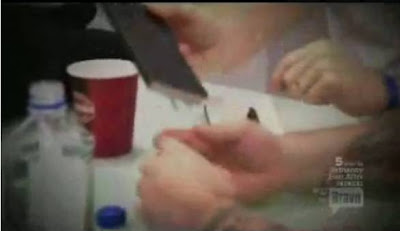 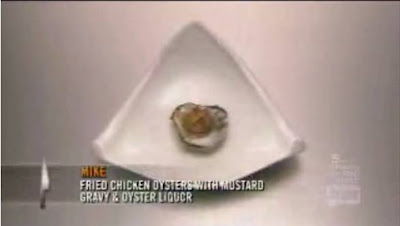 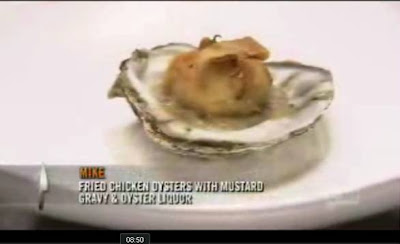 The infamous chicken oyster on an oyster 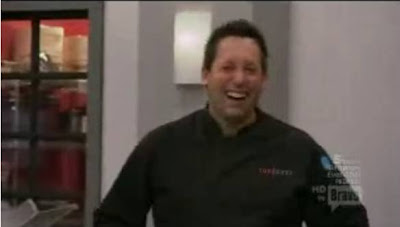 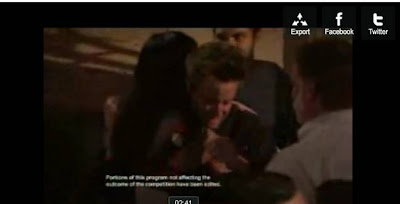 A few weeks ago, Richard Blais was announced as the winner of Top Chef All stars.

A few episodes prior to his winning (Episode 11: for the Gulf), competitor Mike Isabella surreptitiously 'borrowed' a clever dish that Chef Richard Blais had meticulously written down in his notebook. (We will save everyone the lecture of not sharing your ideas with a competitor during a competition, but we digress). So what, right? Wrong.

As the other chefs pointed out (most notably fan favourite Carla and Antonia), this defies 'chef law'. (Read the quotes below).

Yes, perhaps, Mike's mildly smarmy and perhaps slick slight of hand may have bamboozled the judges (Paula Deen in this case) for a short time (Isabella won this quickfire challenge), deception and misappropriation of a dish (or of any intellectual property) does not soon go without some justice. Maybe not today, or tomorrow, but it does always come back to the perpetrator.

Antonia: "he wins with a dish that was 'inspired' by another chef; this is bad chef etiquette"..."Richard had the dish written in his book, and they just talked about it this morning...he said it's my idea of doing a chicken oyster on an oyster shell

Carla: "that's chef law man. There is man law and then there is chef law. You don't take another chef's idea. That's a no no."

Richard: "Mike's dish looks a lot like something that's in one of my notebooks. ...I'm waiting for him to look at me from across the room and he won't look at me. It's plagiarism(to camera: "that's my dish")

What does the moral of this story say to you folks?

We are reminded of two beautiful quotes (below) that sums up where OUTRIGHT thieving (in all forms, in all industries). As with chefs so with Magazines, results in:
“A thief passes for a gentleman when stealing has made him rich” - Dutch proverb
"Borrowing is not much better than begging; just as lending with interest is not much better than stealing.” - Doris Lessing
Posted by City Style and Living at 5:32 PM