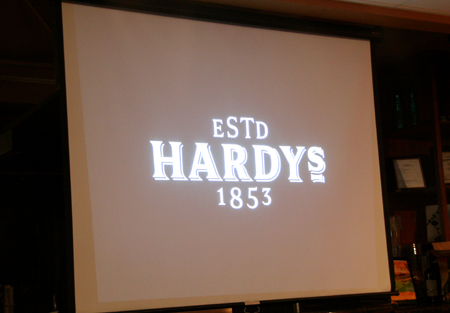 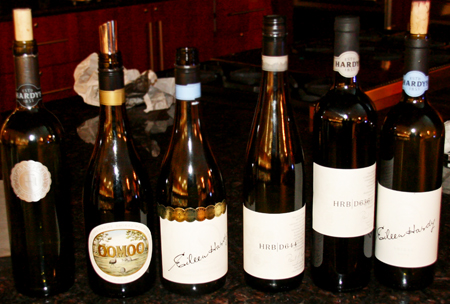 Bottles from the tasting 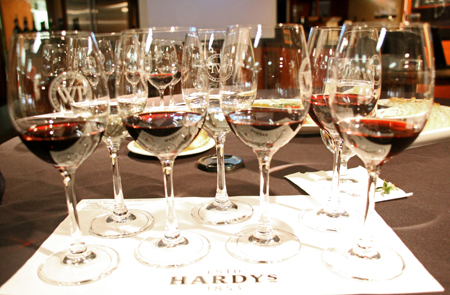 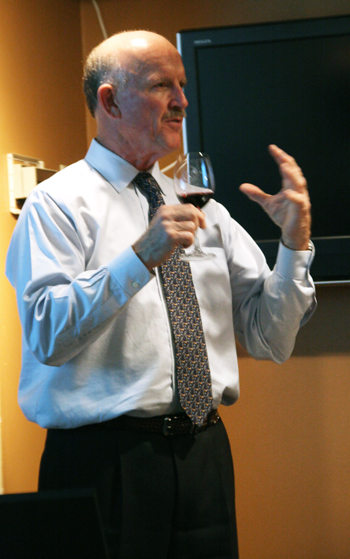 It may well be the second most powerful wine brand in the world with two million glasses of its wine drunk every day according to Intangible Business but to Bill Hardy Global Brand Ambassador Hardy's Wines, it is simply the family business.  The fifth generation of his family to work at the Australian winery, Hardy spoke to an intimate crowd gathered at Willow Park Wines and Spirits about his spirited grandmother (who inspired an entire line of wines), why blending is not to be dismissed ("the French are prouder of their non-vintage champagne than their vintage") and why Australian wines are moving toward developing a savoury finish to their already fruit laden flavour.

Beginning with a riesling and eventually ending with a cabernet, guests tasted seven wines from Hardy's portfolio.  The highlights are below:

1. HRB D644 Riesling 2010 - HRB stands for Heritage Reserve Bin.  What does the number mean?  Hardy explained that  in the 1920s the company began a system of blend books from A1 through A999.  The subsequent numbers would be B1 through B999.  Eventually the systems was abandoned with the introduction of computers.  Recently the company decided to revive the numbering system for this second top range in their portfolio.  The number will change with every wine bottled.  The wines which boasts one third Riesling from Tasmania's cooler climate shows Germanic floral, elderflower

2. Eileen Hardy Chardonnay 2008 - "This is the best chardonnay we make.  We put out our best wine under my grandmother's name.  It has a Burgundian character.  It has a spicy show like Grannie."

3. Oomoo GSM 2010 - Grenache Shiraz and Mourvèdre/Mataró.  Oomoo is an Aboriginee word meaning good.  "Lighter in colour and structure because of grenache dominance - softer, spicier, rounder.  This is winning over fans."

5. Eileen Hardy Shiraz 2004 - "Like my grandmother lovely stylish elegance - an iron fist in a velvet glove."

7.  Thomas Hardy Cabernet 2006 - "Three quarters is from Coonawarra and one quarter from Adelaide Hills.  It is a blend never put together before the 2006 vintage.  It is a question of depth and length of flavours moving from the HRB to Thomas Hardy."