WHAT WE'RE EATING AT CSL 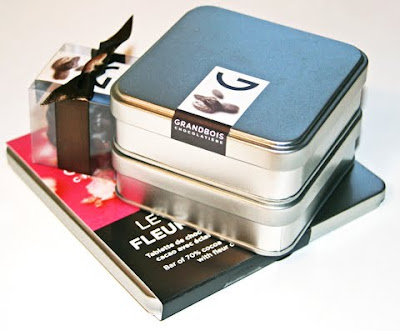 We first discovered Genvieve Grandbois chocolates on a trip to Quebec City. Hotel le dominion, seved them for turndown service. We were presented with two squares of chocolate - one milk, the other dark. It was possibly the most delectable chocolate we have tasted at turndown. Creamy, melt in the mouth and satisfyingly rich. We later learned that Grandbois is an entrepreneur, with an intense passion for chocolate. She uses chocolate with 63 to 75% cacao content produced by some of the best chocolatiers in Europe, including Amedei (featured in CSL Winter 2009), Domori, Valrhona and Cacao Barry.

We were able to sample a selection of chocolates including the collection classiques, le rocher, and Carré Fleur de sel.

As Grandbois declares, “in 2003, I launched a new store called Les Chocolats Geneviève Grandbois. And so the love affair continues, filling each day with uniquely delightful moments. I would like nothing better than to share them with you....I’ll always choose a well-crafted, traditional chocolate over an imaginative recipe that fails to achieve a perfect blend of ingredients. I hope you get as much pleasure out of tasting my chocolates as I do preparing them."
http://www.chocolatsgg.com/