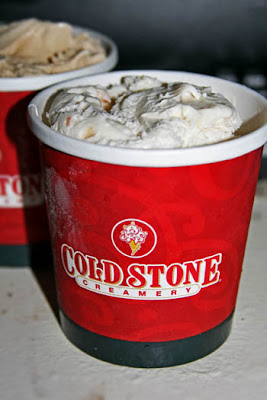 Ok, so we're not in the height of a heat wave (it's chilly today!), but we tried the new Apple Fritter flavour at Cold Stone Creamery at Tim Hortons in the South. Apparently, this was one of Hortons "founding donuts", thus blossomed the idea to incorporate the flavour into an ice cream.

The Apple Fritter flavour reminds us of a cinnamon roll, with cinnamon running throughout. Though the texture is not as strong as some of the others (ie. we also tried the coffee flavour which was very nice), we spiked the ice cream with some Bourbon (Buffalo Trace), which took bourbon milkshake to a whole new level. This really balanced the sweetness of the ice cream. Who knew?

“We’re bringing together two things we know Canadians love: ice cream and Apple Fritters,” said Andrea Hughes, Cold Stone Creamery Canada’s resident ice-cream expert. “Many of our guests choose Apple Fritter donuts and have them mixed into the ice cream when building their own custom Cold Stone Creamery creations. Introducing an all-new ice cream flavour dedicated to the beloved treat was a delicious and natural fit.”

The new flavour is available at more than 100 Tim Hortons restaurants across Canada, where Cold Stone Creamery’s ultimate ice cream is sold. (For the nearest location, go to: timhortons.com/coldstone).

http://www.timhortons.com
http://www.citystyleandliving.com
Posted by City Style and Living at 1:21 PM

This much informative article I didn't read Anywhere thanks for sharing such a good article.

Your blog is a source of very interesting and useful information. I would like to express my gratitude for this wonderful initiative of yours.Thanks home ice cream maker machine